A justice minister flies the flag for fantasyland 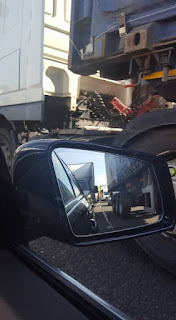 I sat through a series of traffic jams today on a drive from Liverpool to Leeds that took three hours. I saw the aftermath of three accidents. I'm sure that some injured parties will be bringing claims. And from what I saw they will be genuine.

I am not attending the APIL Conference this year although I have been a Member and Fellow for many years. They are probably the most effective lobby for those who represent victims of accidents and famously took out a judicial review action to oppose the cuts imposed by the coalition government in 2013 –

APIL and its members fight for justice for genuine victims.

One person who is at the Conference is Lord Faulks – a justice minister. He is a QC who once worked for claimants in clinical negligence cases. I once instructed him! He is the one who has described litigation as an optional exercise and suggested that those who provided welfare rights advice earned £200 an hour –

Lord Faulks has spoken at the APIL conference today and confirmed that the government is determined to raise the small claims limit – thus excluding most victims of recoverable legal costs. He has also confirmed that the right to compensation to any damages for whiplash is to be abolished altogether. This bizarre idea came from George Osborne last November and will take our legal system into new territory by excluding a physical injury from damages –

‘It is not right that people who try to cheat the system should get away with it and, in doing so, force up the price of motor insurance for other motorists,’

So again, we have a leading politician shamelessly giving the impression that all victims of whiplash are criminals. In fact, only 0.25% of motor accident claims are fraudulent. Now that is 0.25% too many. But it is certainly not a basis to attack the remaining 99.75% of claimants.

He admitted that he did not know what has happened to any savings to the insurance industry since the 2013 cuts. He seems to be alone in his belief that drivers will one day reap the benefits by way of a reduction in premiums. The reality is that an increase is far more likely. This is partly to increase the profits of insurers and partly due to the increase in IPT announced by the chancellor last year –

This speech would be laughable if the issues were not so serious. Does Lord Faulks seriously expect a room of experienced lawyers to buy this nonsense?

What is clear is that a clear and coordinated campaign is going to be needed to protect victims from these increasingly damaging proposals.