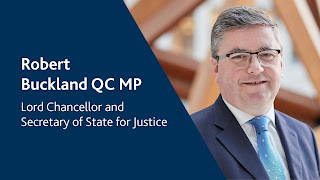 Almost all the Harry Potter books feature an introduction to the new Professor of Defence Against the Dark Arts. This is usually because the previous incumbent has come to a nasty end in the previous book.

All of which brings me to the latest Secretary of State for Justice, a position which is renewed with similar regularity, possibly for similar reasons. Our latest Lord Chancellor is Robert Buckland QC, who was previously, Solicitor General and then Minister of State. Firstly, it is encouraging that for the second appointment in a row we have a lawyer in the most important legal role in government! Long gone are the days of Liz Truss, who failed to speak out in defence of the judiciary following the infamous ‘Enemies of the People’. Going back even further there was that other guy; the one who gave a ferry contract to a company with no ferries.

In Robert Buckland we have a lawyer who was previously a working barrister and who spent time on the bench as a Recorder from 2009. When did we last have a Lord Chancellor who has served as a judge?  He should understand the real world of law and justice.

Indeed, he has received a major testimonial from none other than @BarristerSecret who tweeted –

‘Gosh. A sensible appointment. I’m a little lost for words.’

He also worked under David Gauke. I think that most of us would agree that he did a reasonably good job within the huge financial restrictions imposed on the MOJ. His work on prison reform was encouraging. Mr Buckland will hopefully bring some continuity to a role where it has been sadly lacking for many years. He has also previously served on the Joint Committee on Human Rights.

On the downside, he has voted against laws to promote equality and human rights –

He also supported the massive cuts to Legal Aid –

But then, he is a Conservative Minister, so we world hardly expect him to have risen through the ranks if had had not toed the line. Whilst his party remains in government, these attitudes will go with the territory.

But, on balance, he is as good as we might expect this side of a General Election.

At a time when the world of politics has never been in greater turmoil, he brings to the table an experienced pair of hands who knows far more about the real world of law, than many of his predecessors.

The discount rate, fair compensation and a predictable ABI response

I have written before about the discount rate. It is an extremely important part of our system of compensation for injured people, despite its rather understated name. In short it is a principle that tries to ensure that victims are not over or under compensated. The rate is what an award of damages is assumed to earn over a long period of time.

The idea of compensation is to put the victim in the position they would have been in, but for the incident.

For example; Alan, who is 45, has an accident at work. He is so badly injured that he will never work again. He earns £20k a year and would have worked to 65. He has lost 20 years earnings at £20k. But if he wins his case, he does not simply get 20 x £20k - £400k. Because that would not be fair on the insurers who pay the damages. Alan would be receiving money now that he would not otherwise have earned for many years. If he was to put that money on deposit, it would earn interest and he could end up with a lot more that £400k in 20 years’ time. So, the number of years that he actually receives is calculated by reference to what his money might be worth at that time. This can be even more important for victims who require high levels of care for life.

For many years, the assumption was that the money would earn 2.5% per annum. A victim is assumed to place the money in sensible, safe investments. This significantly reduced the amount of any lump sum that the insurers pay out. The £400k would be discounted to less than £350k. So it is important, for all concerned that we get this right. Whilst the rate was 2.5% there was a huge risk that money would run out, at a time when real interest rates were nothing like that amount.

In 2017 the government dropped the rate to -0.75%. This was a huge relief for victims and led to far more realistic awards of damages. It also led to a predictable outcry from the insurance industry who were having to pay out more money. Their powerful lobby led the government to promise a review of the rate. We have all waited with eager anticipation for today’s news of what the new rate is. Any significant increase, in the current economic climate, would have taken us back to the bad old days. I have pessimistically been predicting an increase to 1%, particularly in the light of the present government’s affection for their insurer friends. It was a pleasant surprise therefore to see that the new rate is -0.25%. It could have been better, but we expected far worse! I am never slow to criticise this government, but they have got this one, at the lower end, of just right.

The reaction from the ABI was swift and predictable. Their director General, Huw Evans says –

“This is a bad outcome for insurance customers and taxpayers that will add costs rather than save customers money. A negative rate maintains the fiction that a claimant and their representatives will knowingly choose to invest their damages in a way that would guarantee losing them money. This will remain the lowest Discount Rate in the Western world, leaving England and Wales an international outlier at a time when we need to boost our attraction to international capital.”

Note that he claims to complain on behalf of insurance customers and taxpayers and not his members’ shareholders. Most citizens would agree that a modern system of justice must ensure that people who need care for life do not need to worry that their money might run out. He then, rather bizarrely, seeks to compare the rate with that of other countries. Why would the assumed rate of interest earned on damages in this country have anything to do with other countries? I don’t expect the volume to be turned down any time soon. Equally I doubt if we are going to see another review unless a new PM has a rush of blood to the head. Mind you....

I do hope that this rate now stays at the same level for a very long time so that victims and their representatives can plan for the future with some level of certainty.

Everton, Lawyers and knowing your history!!

It is truth, universally acknowledged, that I am an Everton FC fan and proudly bitter.
This was of course the background to my recent ‘walk of shame’ for charity where I raised £1000 for wearing a shirt of a certain other local team. No, I am not posting a photograph. There is no shortage of them around! –

I recently visited Everton’s new HQ in the iconic Liver Building. I was discussing the development of links between the club and the local legal profession. In fact, those links go back almost to the birth of the Football League.

William Cuff was a Solicitor who was a Director at Everton from 1894 and was closely involved in the club’s development for almost 50 years. One of his claims to fame was introduction of shirt numbers. It was in the 1933 FA Cup Final that numbers were first used although they did not become obligatory until some years later. He was also President of the Football League in the 30s and 40s. His obituary from 1949 was posted recently by the Everton Heritage Society –

His firm Cuff Roberts continued a long association with Everton. In later years Keith Tamlin of what became Cuff Roberts North Kirk served as a Director until 2004.

The links between Everton and local lawyers is not all about history. Former player Gareth Farrelly is now a qualified Solicitor and works for Liverpool firm, Bermans as a commercial litigator. I met Gareth a few years ago when we were both taking part in a sleepover at Goodison Park to raise money for Homelessness charities. As we unrolled our sleeping bags in the Park End, I was able to tell him that we were sleeping at the exact place where I was sitting when he scored his famous goal in 2008 that kept us in the Premier League.

On a different level, it is unusual not to bump into a fellow a lawyer on any given match day at Goodison. I have many ‘red’ friends who would disagree, but the Peoples’ club is in many respects also the Lawyers Club!