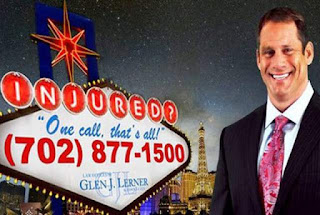 The blog has been quiet for a few weeks because I have been trekking around South West USA on a fact finding mission – OK holiday!

The fascinating trip raised a number of interesting issues surrounding the impact of culture. On the day we arrived in Las Vegas we read the tragic news of yet another college shooting. This time it was Roseburg high School in Oregon that was mourning the loss of students killed by Chris Harper Mercer who went on to kill himself. This has again raised the familiar calls for gun controls, which are likely to fall on stony ground –

As we were reading this news we were given a welcome to Las Vegas magazine which had a number of terrifying adverts, which actively promoted gun violence for entertainment. 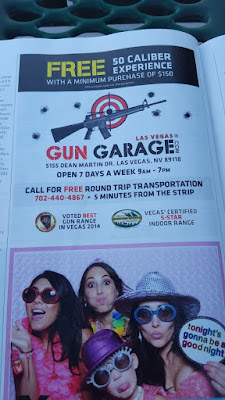 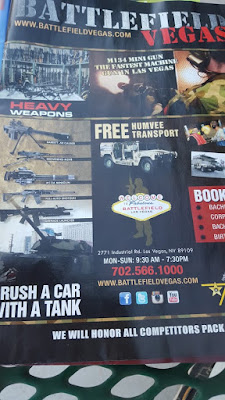 There is more to these shootings than just gun control. It is this culture of gun use for fun which is most disturbing.

Another notable feature of Las Vegas is the number of Lawyer Billboards which line the freeways. They were only outnumbered by the adverts for Casinos. I have never seen so many smiling lawyers with teeth so white that they put Donny and Marie to shame (if interested you catch them at the Flamingo!). Most of them referred to damages claims and many were accompanied by dollar signs. In a city which we associate with the losing and making of money this was quite alarming. The message was that if you have been injured you can make big bucks especially if you instruct Mr Smiley-Face. The emphasis was certainly on the cash benefits.

This has been emphasised further by the case of Jennifer Connell who has unsuccessfully sued her 12 year old nephew for injuring her during an overly enthusiastic hug.

Thankfully, a jury took less than half an hour to throw out the claim –

But how did that case ever get as far as a trial? What lawyer was willing to take the case on, presumably on a contingent basis?

It is a world very different from our own.

This puts into context the unfortunate rhetoric in the country from insurers, the media and politicians about the need to crack down on the 'compensation culture' over here.

The next time I hear this nonsense I will think of billboards with $ signs and aunties suing for damages for excessive affection.

That is a compensation culture.

We are a long long way from any similar sort of culture.

We need to be aware of this next time we hear insurers using this myth to justify high insurance premiums and to attack the rights of victims.

Posted by steve cornforth blog at 12:55 No comments: