Brexit currently seems to fill every breathing moment. There remains a lot of confusion and misunderstanding.   But there is one matter that has raised its head again. This is the mistaken belief, alarmingly repeated by the Leader of the Opposition last week, that Brexit has something to do with the European Court of Human Rights and the Human Rights Act 1998.

I do not normally reproduce blogs from the back catalogue.

But I do think that we need a further brief history lesson. I first posted this in 2016 shortly after the referendum.

After the end of WW2 in 1945 there was a determination that this should never happen again. One initiative, driven by Winston Churchill and Eleanor Roosevelt, was the Universal Declaration of Human Rights. This identified certain rights that were common to all people. It is worth listing them as they are now taken for granted by all of us –

Eleanor Roosevelt described the Declaration as her greatest achievement. 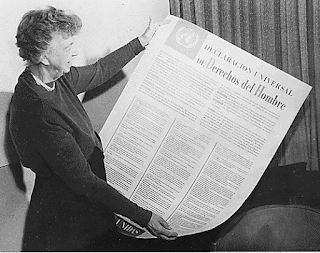 There was also a determination that co-operation in  was an essential pathway to peace. In 1946 Churchill spoke at the  and spoke of the need to create a United States of Europe! (Imagine the noise in certain quarters if he said that today!).

In fact the body that came into existence was the Council of Europe which was launched in 1949. One of its first achievements was the European Convention on Human Rights in 1950. The Convention followed the basic rights contained in the Declaration. The  was probably the main driving force behind the Council and the Convention. The European Court of Human Rights (ECHR) was created in 1959 to adjudicate on matters arising from the Convention. Until 2000 any  citizen who complained that their rights had been breached had to go to the ECHR in . In 1998 the UK Government passed the Human Rights Act; a short Act which incorporated the Convention into UK Law. This came into force in 2000 and meant that  courts had jurisdiction to hear cases. The ECHR has retained its place as the final court in Human Rights cases, but only after all local remedies have been exhausted. There is nothing in the Human Rights Act, or the Convention that says prisoners can have a Big Mac in their cell or that suspected terrorists cannot be deported!

But the most important point is this – the ECHR has nothing at all to do with the EU, the referendum or Boris Johnson.

Some Conservative Ministers want to abolish the Act and replace it with a UK Bill of Rights. Interestingly Michael Gove, whose day job was as Justice Minister opposes this. And David Cameron, wanted it abolished –

Any Bill of Rights  would certainly have to protect the rights set out in the Convention so is unlikely to change much.

My fear is that some might have voted to leave the EU in the belief that it would somehow remove these rights which have had a bad press, often due to misunderstandings and hostile reporting.

In fact the Leave vote has no effect at all on our Human Rights one way or the other.

All EU member states have signed up to the Convention,  so exit could pave the way for an extreme government to try and force us out of the Convention at some point in the future. But it is unthinkable that the UK would try to abolish the very rights that were created by our leaders. In removing these basic rights we would be aligning ourselves with some very questionable regimes!