I dreamed last night that Miliband stood up and promised to reverse the devastating Legal Aid cuts!

Now I have to confess that I am a bit of a political anorak and follow every detail of the party conferences.

But the Labour Party gathering this week has been of particular interest. They could well form the next government and so those of us who care about justice have hung on to every word. Although to be honest there haven’t been too many.

Last year I described Access to Justice for those in need, as a waste land –

It has got far worse since then. Agencies across the country are closing or turning away desperate clients because they simply do not have the resources to do anything. So what will the future hold if Ed and Co win a majority in 2015? Not much I’m afraid.

At a fringe event today, Andy Slaughter, a shadow justice minister was giving away very little. The Gazette’s John Hyde tweeted that said that  Labour was not like the Tardis and would not reverse every cut –

Just a few reversals would be like an oasis in the desert.

I watched the whole of Ed Miliband’s speech this afternoon. At one point he used a phrase to sum up how people have been treated by the present government – ‘They’ve been told – you’re on your own’. He repeated the phrase 5 times, applying it to hard working people, young people, small businesses, the vulnerable, those with access to politics. I started to get excited that he might extend the list further but that was as far as it went.

The same thing applies in relation to tribunal fees. The introduction of these charges was intended to reduce the number of cases for unfair dismissal etc being brought. In fact it has decimated employment rights across the board. It is estimated that the drop off in claims is as high as 80%. Don’t try and tell me that they were all bogus. This has been a shameful attack on workers’ rights. Shadow Business Secretary, Chuka Umunna spoke generally about reforming the system. But he has said nothing about abolishing fees. We heard the same rhetoric in a speech to the TUC earlier this month –

He talked about openness, rights and justice but very little about how you might gain access to that justice if you don’t have the resources to pay for it.

There were reassuring comments from Shadow Justice Secretary, Sadiq Khan about the Human Rights Act and Judicial Review. So you still have to say that a Labour Government would be less damaging than what we have now.

That is hardly a ringing endorsement for the party that I have supported all my life!

It will be interesting to see if these agenda develop over the next 6 months.

Posted by steve cornforth blog at 19:35 No comments:

Justice for All - no walk in the park 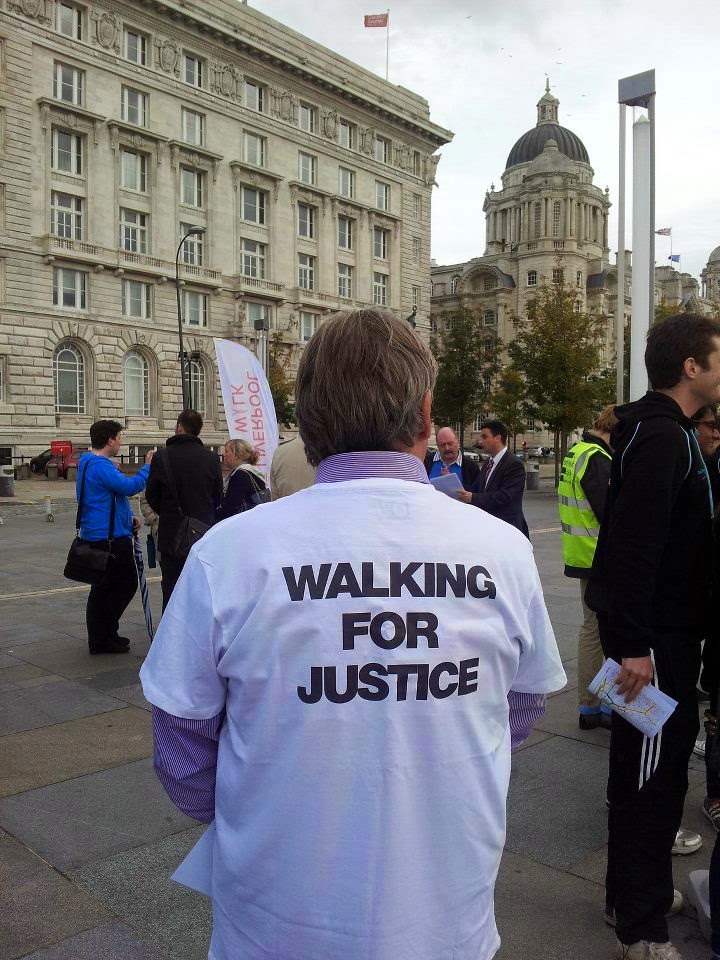 On 25th September 2014 there will be a strange and scary site in the city of Liverpool as a few hundred lawyers and judges take to the streets!

However we will not be protesting (much), and we certainly will not be looking for ambulances to chase. This is in fact the day of the 2014 Liverpool Legal Walk. Never in all of my 30 odd years in the law has there been a greater need for free legal advice and help for those in need.

I once described Access to Justice in this country as a Waste Land. That, if anything, was an understatement.

Legal Aid was virtually wiped out in 2013. This particularly affected those who could least afford to pay for legal advice. Advice agencies and the courts are struggling to meet the demand.

In the meantime there lawyers and other advisers, across the country who are doing their best to give what help they can. This includes Citizens Advice Bureaux, Law Centres and even Legal Clinics at Universities manned by students. Most of these agencies are having to turn many deserving clients away as they simply do not have the resources.

The situation now is far worse.

In the meantime what I can do is drag myself around the city and try and raise some much needed support for these beleaguered agencies.

So I make no apology for using this blog to ask readers to click the link below and make a donation!

www.eadsolicitors.co.uk
Posted by steve cornforth blog at 14:14 No comments: