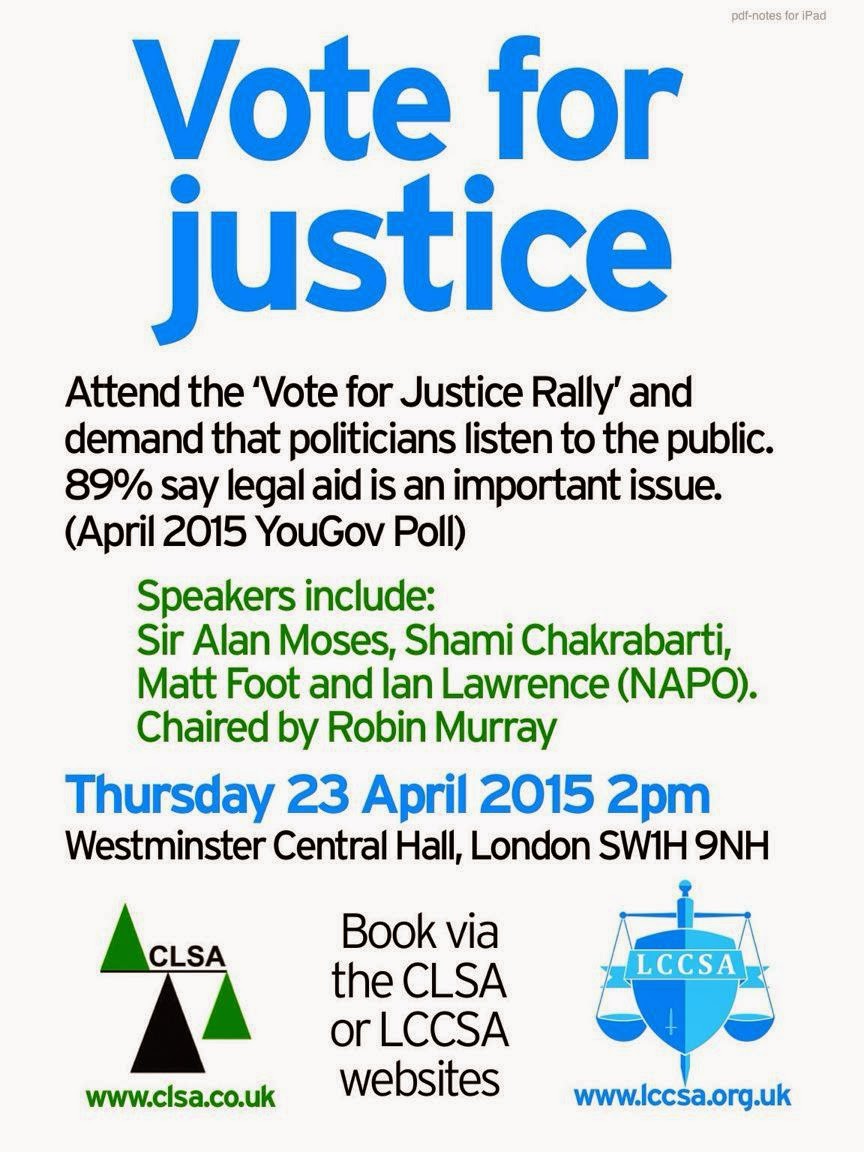 I want to give special word of support for those lawyers who attended the Vote for Justice Rally in London yesterday.

The event was organised by the Criminal Law Solicitors’ Association (CLSA) and London Criminal Courts Solicitors’ Association. The aim was to put justice on the General Election Agenda. The focus was on the devastating cuts to legal aid funding. Speakers at the event highlighted the risk of closure faced by hundreds of law firms.

One particular change will require tendering for some areas of criminal work. Tendering will benefit a small number of large firms, and see many others going out of business.This in turn will impact on the rights of clients to choose their own lawyer. Firms employing black and minority lawyers will be particularly at risk of closure.

One key speech came from Senior Judge, Sir Alan Moses. He talked of the plight who are unable to protect themselves as they have no affordable access to a lawyer. He expressed regret at the silence most of the leading political parties in the run up to the election –

“Who cares about the prisoner whose rights are abused and needs legal advice and assistance? Who cares about the immigrant who asserts they are a genuine refugee? Those who cannot afford access to the courts are often the unpopular minorities and there are no votes in helping them.” He also regretted that other judges had not spoken out.

This is something that I mentioned last week. The Green Party is alone in promising to re-instate the £700m cuts to the legal aid budget.

In fairness the Labour Party has promised to roll back the tendering process but this has only been a small part in a process of dismantling access to justice.

The politicians might not think that justice is of electoral importance. We can make it important by the way we cast our vote. It is not for me to say who anyone should support. But it w

It should be fairly obvious which party I will not be voting for!


Many of us have spent the last few weeks watching the election campaign. So it might have been easy to miss one news item which seems to have slipped in under the radar. This is the announcement from the AA Insurance that motor insurance premiums are set to rise. And according to a report in the Daily Mirror, the cause of the increase is…yes you guessed it … fake whiplash claims!

It makes you begin to wonder how much blood insurers can get from this particular stone.

This is a saga which goes back more than two years. In 2013 we saw drastic cuts to the rights of victims of motor accidents. These included slashing the amount of legal fees recoverable from insurers, causing many victims to lose up to 25% of their compensation.

The Association of Personal Injury Lawyers (APIL) and others took judicial review proceedings at the time to try and block the cuts. Although that action failed, it was clear from the evidence that the government and the insurance industry had worked closely together on the project.

The rhetoric and the attacks have continued relentlessly. We have seen report after report on the need to clamp down on claims. Just this month, victims have lost the right to instruct their own medical experts and to use a panel of approved doctors. The fees payable to such experts have also been cut.

All of this has happened against the background of rhetoric designed to make any victim of a motor accident feel like a criminal.

Back in 2013 all of us who pay high motor insurance premiums were told that these steps would see a drop in price.

“These proposals were advanced in a consultation exercise which closed on 4 January (2013) and, together with wider civil law reforms, are intended to make lawyers’ costs proportionate, and create an environment where insurers can pass on savings to their customers through lower premiums.”

Most of us were sceptical that we would ever see any reduction. I must confess I thought that we might get a pre election series of cuts. Instead, we have this news of premium rises, when we all have our eyes somewhere else.

The reality is that we were never going to see any significant drop in the cost of motor insurance. The government and insurers have very effectively squeezed the life out motor claims. You would have thought that they could have come up with a more imaginative excuse for further rises.

Bedroom Tax and its impending demise?


My last blog looked at what the various political parties were saying about Access to Justice as we approached the election.

Another subject which has often featured in this blog is the dreaded Bedroom Tax. This is the draconian law introduced by the coalition which results in tenants losing housing benefit if they are deemed to have too many rooms.

It is approaching 2 years since I first highlighted the issue –

It has seen people facing the loss of their homes and, at the same time, losing the right to legal aid to help them fight evictions.

Only last month, the Guardian was reporting on the health problems caused by the tax –

So what are the parties saying about it?

It is encouraging that the Labour Party in its manifesto commits to its abolition. The Green Party has a similar commitment. Plaid Cymru has long ago pledged to get rid of it. Scotland was liberated from the impact of the tax in 2014 –

So what about the coalition partners who gave us the Bedroom Tax in the first place? The Lib Dems voted down efforts to abolish it last year. But in their manifesto they promise reforms. These include a promise that tenants will not lose benefits until they have been offered suitable alternative accomodation. They also build in protection for those who need an extra room for medical reasons. It is isn't quite to complete abolition that some of us would like but is better than the status quo.

We know what the Conservatives think of it. It is their brain child and will remain in place if they form the next government. Interestingly UKIP unequivocally opposes it.

So, unless we have a Conservative majority on 7th May, the days of this particular injustice seem to be numbered.

What are the parties saying about Access to Justice?


So we are now just over three weeks away from the General Election.

All of us who are concerned with the erosion of access to justice under coalition have been counting the days for the last five years. So what have the parties been saying about it and what changes, if any, would a change of government bring?

A Conservative government has promised further and deeper cuts to public services so we can rule out any hope of any return to legal aid or reversal of the cuts which have taken place. Indeed, Justice Minister, Chris Grayling has shown nothing short of contempt for the rights of ordinary people. The most recent example of this has been the shocking increases in court fees by up to 600% in some cases. We also saw the introduction of fees in Employment Tribunals which has led to a shameful reduction of 80% in the number of claims. At least with the tories we know where we are and we know where we are going!

But what about the opposition? Labour has published a document which talks about ‘safer communities’. However, whilst policing and domestic violence are very important topics, the report is silent on more fundamental justice issues. It is available here –

Labour has now said that the Tribunal Fees would be abolished which is big step in the right direction.

The only party, as far as I can see that has committed to a re-instatement of legal aid is the Green Party. Their Policy Statement of Responsibility and Rights includes the following –

‘Access to justice should not depend on a person's financial situation. Where a person would not otherwise be able to access it, the state should, through a comprehensive system of legal aid, enable access to appropriate legal advice and/or representation.’

In fairness you do have to go searching for it. But it is a clear statement of intent. Now we all know that the Green Party will not form the next government. But it seems likely that nobody will win a clear majority on 7th May so minor parties could well have some influence. But whether this particular commitment would carry weight remains to be seen.

The overall picture is one of disappointing silence. There do not seem to be many votes in access to justice.

But there has been one hopeful sign from Labour today. Their candidate for the safe seat of Holborn and St Pancras is none other than Sir Keir Starmer QC, the former Director of Public Prosecutions and well know barrister. In an interview with the Independent he says that access to justice is in crisis. He calls for a full review and says that access to justice – ‘must be a yardstick against which we measure success’.

At this stage he is only a candidate. But he is very likely to win. Such is his profile and status that he is unlikely to remain on the back benches for any length of time. He will inevitably have a significant on justice policy going forwards.

It may be clutching at straws, but this could be the most significant development to date.

I will continue to watch this rather large space!