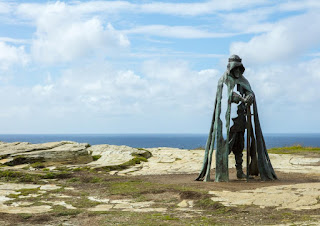 Here are some interesting facts about Cornwall –

1.      Poldark!
2.      The beautiful village of Port Isaac is the setting for Doc Martin,
3.      It is home to Tintagel Castle – said to be the birthplace of King Arthur (above)
4.      It is the second poorest region in Northern Europe - https://www.cornwalllive.com/news/cornwall-news/cornwall-second-poorest-region-northern-617199#
5.      Even excluding holiday homes, one in ten houses in the county are empty
6.      If you need legal advice on housing matters, you won’t get it unless you have money.

At the end of August, the housing Charity Shelter, closed its office in Truro. It had decided not to apply to renew its legal aid contract for Housing Advice. The reason for the closure was that the charity decided that it should focus work on its 11 urban hubs where there is greatest overall need –

One can understand why a charity would have to make that type of decision.

This was the last surviving provider of legally aided housing advice in the entire county. So now there are none. It is a waste land. If you live in St Ives, you will need to travel almost 80 miles to Plymouth if you need professional advice and help on a housing matter. For us up north, that’s a bit like having to go from Liverpool to Leeds! Just to get some basic legal help.

This is nothing less than a scandal.

Don’t blame Shelter. They are a charity doing their best with limited resources. And why should they shoulder the burden of providing advice to an entire county?

The fault lies well and truly with our government who fail, time and time again, to see access to justice as a priority. It isn’t just Cornwall. Back in July, the Joint Committee on Human Rights warned that large parts of the country had become legal aid deserts.

This has been caused by punitive cuts in the amounts paid to legal aid lawyers, alongside the 2013 removal of huge areas of work from the scope of legal aid. The entitlement to state funded legal aid for those in need began in 1945. Following years of ‘progress’ that entitlement has been reduced to this.

We have a legal system that it is the envy of many.

If we exclude those in need from access to that system, then it becomes a meaningless mockery.

The government is currently reviewing the impact of the 2013 changes. It must urgently acknowledge how those changes have affected the lives of ordinary people and commit to a properly funded system of legal aid.

This is unlikely, there are not many votes in justice, unless we all make as much noise as possible. 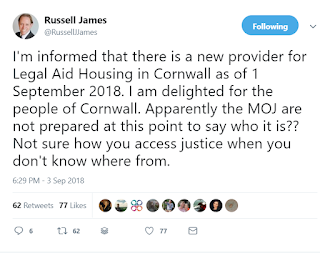 Which is good news ... sort of. As he says, it helps access to justice if you know where to find it! And is it really a cause for celebration that an entire county now has one provider of housing advice???

Posted by steve cornforth blog at 15:14