Striking at the heart of injustice 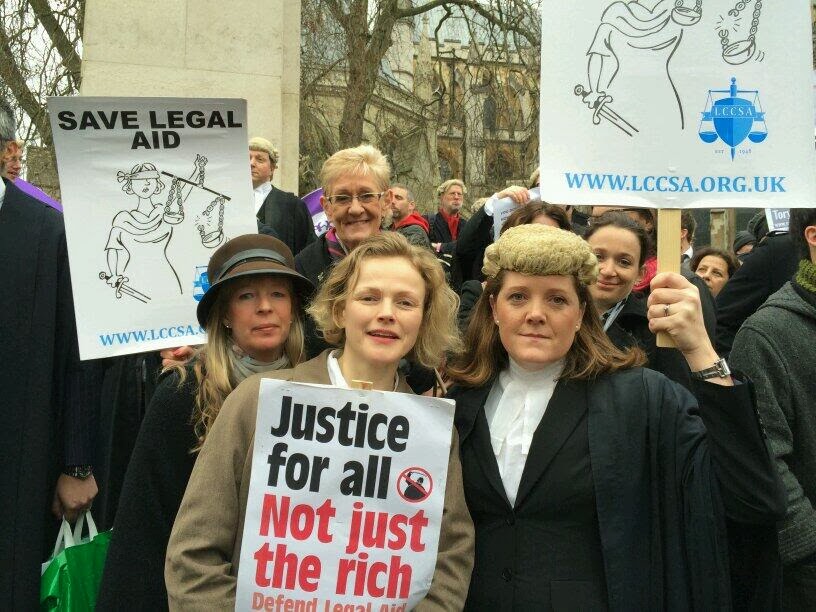 Today sees the second day of action by criminal lawyers against the government’s cuts to Legal Aid and its resulting impact on Access to Justice.

Across England and Wales Solicitors and Barristers have stayed away from court hearings. there have been demonstrations outisde courts in Londion and nationwide.

Who would ever have thought that the day would come when lawyers would have to resort to this kind of action? Demonstrators include the brilliant actress Maxine Peake who is known and loved by us all as Martha Costello QC in Silk!

But in the face of a Government that does not listen and which has questionable priorities, what choice do they have. The proposed changes include huge cuts in pay. Solicitors’ will see an immediate cut of 8.75% rising to 15%. Barristers face similar cuts. Those who do this work are already among the lowest paid lawyers. Anybody who does Legal Aid work is doing so because the work is important to them. They work long and demanding hours for a relatively modest return. Most could earn far more if they decided to move into other areas of work.

They warn of legal advice ‘deserts’ as firms are forced to close. This is something that I have blogged about before in relation to cut backs in legal aid –

This is not about lawyers complaining about losing fees. It is about doing what is right.

The response from the government and the media is that cuts have to be made and that we are all ‘in it together’. But it is really a question of priority. We find the money to spend on defence. According to a report in the Telegraph last year the government is committed to spending £60bn on defence in the next 10 years of which £38.5bn is on nuclear submarines –

The current spend on criminal legal aid is less than a drop in the ocean compared to that.

We do have the money.

“A nation that continues year after year to spend more money on military defence than on programs of social uplift is approaching spiritual doom.”

That is why I support the day of action.

Posted by steve cornforth blog at 13:44