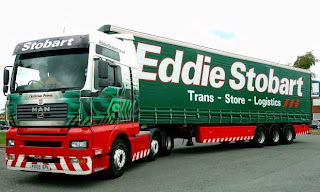 Last year, I talked about the plans by well known truckers, Eddie Stobart, to offer the public access to barristers.

Since that time the initiative has proved popular, with a number of organizations and individuals using their services, which are provided on a fixed fee basis. In November last year I heard their legal director, Trevor Howarth speak. He actually gave a convincing talk about their plans to revolutionise the way legal work is done, and paid for. It is clear that this is serious competition for traditional law firms and one which they cannot ignore.

But they have driven into a controversy in relation to criminal legal aid work. The government have announced highly controversial plans for competitive tendering for contracts to do the work. Essentially it will go to those who offer to do the work at the lowest cost. The result will be a huge reduction in the number of companies who can act for defendants. This in turn will have an impact on a client’s right to choose his own lawyer.

Howarth has come out with some inflammatory comments about criminal lawyers, describing them as - “very wounded animals ready to die”. I’ll come back to that in a minute.

It is hard to see how this company could successfully carry out criminal work under their existing model. They offer access to barristers. There is far more to the work than that. Lawyers are regularly called out to police stations at 2.00am. Now you might see an Eddie Stobart truck on the M6 at 2.00am but you are unlikely to see one of their barristers down at the local police station at that time of night. To get the contract they will have to offer the whole package, which is way beyond what they currently do. So is this just a publicity stunt? I don’t think they can be dismissed that easily but I wonder if they have considered the full implications.

The government’s plans are, in any event, highly controversial and the professions response suggests that they are anything but wounded animals waiting to die. Hundreds of practitioners recently met in Manchester to discuss the proposals and voice their opposition –

Last year I worked with a number of criminal lawyers in Liverpool who successfully fought off plans to make them attend court on Sundays.

From my experience criminal lawyers are alive and well and willing to fight for their clients. Anybody who is willing to work unearthly hours for a paltry return is not going to lie down that easily. I don’t think that fast Eddie can be ignored but on this particular issue they seem to have taken a wrong turn!

Posted by steve cornforth blog at 14:40